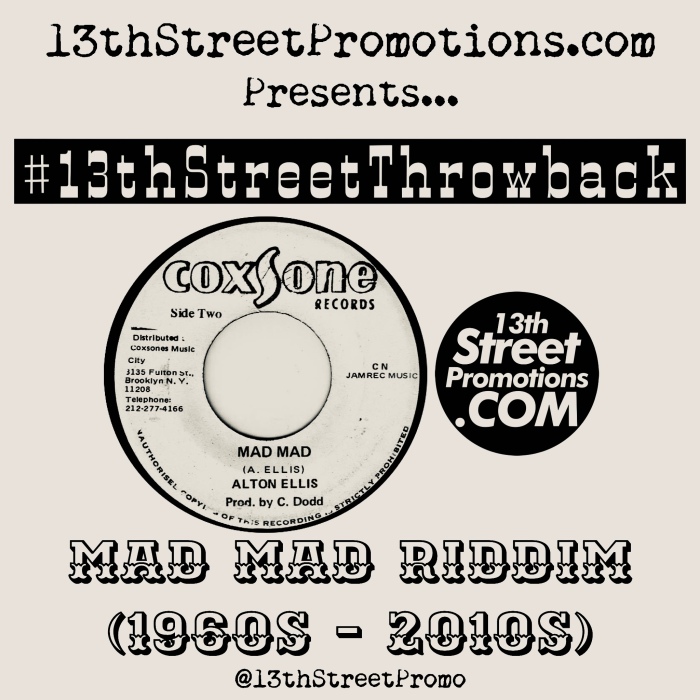 Happy Friday the 13th everyone! A lot of things are going on in the world, but music is one that stays constant. Today in our #13thStreetThrowback Playlist series, we look back at a Riddim that has many names and variations, the classic “Mad Mad Riddim“!

We first go back to the year 1967 with the release of Alton Ellis’ “Mad Mad Mad” which was produced by the late Sir “Coxsone” Dodd for Coxsone Records, and that one song’s production lead to plenty versions over the years. From the “Junjo” Lawes produced “Mad Mad Riddim” that gave us the classic “Diseases” by Michigan & Smiley and “Zungguzungguguzungguzeng” by Yellowman in the 1980s, to the infamous “Golden Hen Riddim” that gave us classics from Josey Wales, to Bobby Konders and Massive B’s “Platinum Hen Riddim” in 2011, to tracks that have sampled a version of the Riddim, this Playlist has it covered from familiar songs to rare cuts.

Check out this and many other Playlists here. Do remember to share with a friend. Show us some love/follow us on Twitter and Instagram at @13thStreetPromo.