Creating an International appeal through the use of the social Inter web, the 13th Street Promo team took great pleasure in sitting and working with Royal Blu (Formerly “BluKid”) as one of its most incredible Interviews to date. After creating the right setting with Blvk H3ro and Leno Banton, it was only natural that we moved directly ahead to work directly with one of Jamaica’s budding prodigies. Let’s Begin…
Words By @Sef_Jo x @SwadeDaVillain

13thStreetPromotions: Where does your talent come from? It resonates well with fans from what we’ve observed.

TheRoyalBlu: I’m the only one in my family that does music. The only one that I know of. So I’d like to believe that my talent is a direct gift from God. I’m just blessed to have people truly appreciate what I do.

13thSP: Have you gone through any voice training as an artiste?

TheRB:  Yeah, I’ve done voice training up at Avant Acadamy of Music. Big up to Andrew Dixon for being my instructor. Although I skipped their end of year concert that they wanted me to perform at (haha). But yeah, apart from that, I just do my own personal warm-ups and stuff when I can.

13thSP: Your recent hit “Believe” was crafted by Tim Foresta and facilitated by Lila Ike. Discuss the creative process working with the duo.

TheRB: The creative process for “Believe” was a breeze. I immediately heard Lila’s voice in my mind on the beat as soon as Foresta sent it to me. The song basically wrote itself. Recording it was also cool and fun. Funny enough, I told Foresta that I wrote the song months before he actually came to Jamaica and booked the session. Not because I was lying (haha), but because it was written even though it wasn’t written as yet. I actually wrote the lyrics the night before I recorded it.

13thSP: We’ve noted that Blu has been taking some time to work on his craft behind the scenes. Bring me up to speed, what’s next?

13thSP: Recording Artist Khaos may have sneaked info about a possible Royal Blu collab on his upcoming album. Are these rumors factual?

TheRB: It’s always love and respect from Khaos, so that just may be true. Let’s see.

13thSP: The Live Show era seems to be increasing at a rapid rate. How often are you booked out at performances nowadays?

TheRB: The thing with me and live shows is that I’m very picky with where I want to perform and how much I perform. I get numerous requests to perform at various places, but at this moment I’m just working on my catalog. Can’t be everywhere singing the same songs over and over. It gets boring quickly.

13thSP: Do you have any plans to get a back up band as you’ve had in the past i.e. Lethal Audio.

TheRB: I’ve always had a band. I use my own band whenever I’m performing. We just don’t have a name right now. Trying to think of one that isn’t corny as hell.

13thSP: On that same note, are there any live bands or other Artists currently that you have collaborated with which you prefer to work with?

TheRB: There’s a band that’s fresh out of Edna (Manley School of Art) called “Phuzzion Band” that I really rate. I’ve worked with most of the members before. Great musicians. I don’t work with a lot of Artists, but the few I’ve worked with, Runkus, Jane Macgizmo and Lila Ike, they’re all amazing. Runkus is out of this world, though. Not just saying that because he’s my bro. The man is going to change the game. Jane is one that I was so happy I got to work with on my upcoming project because I didn’t think it would happen (haha). I really like her sound. I like her in general. She’s a really great person. And you done know Leno and everybody in REM have my utmost respect at ratings. They have a movement that inspires me. It almost makes me want to be friends with people.

13thSP: Are you being groomed by any Artist or member of the Entertainment Industry?

TheRB: Nah. I welcome it, though. As long as it’s all good energy. Can’t do the opportunist thing. Foh.

13thSP: What are the odds that a headlining act like Protoje takes you on tour to open up for them?

13thSP: Without giving away too much, how should other acts respond to wavelike changes in the industry?

TheRB: If you’re a true student of what you do, you’ll learn how to adapt. You either sink or swim. All pun intended. 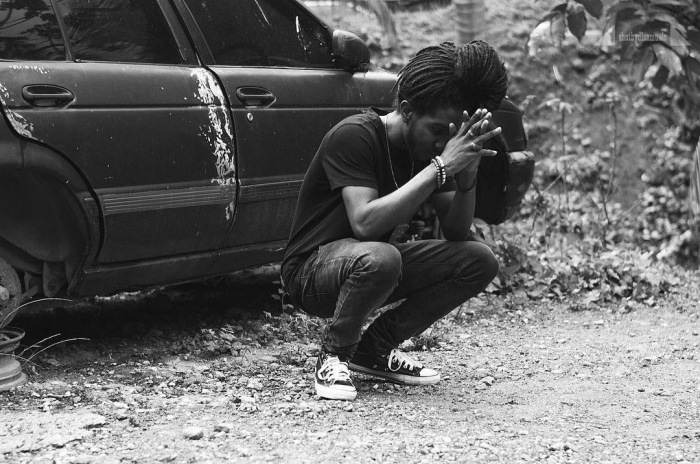 13thSP: From your point of view, is there any current Artists that have piqued your interest with recent bodies of work?

TheRB: Man, I’ve just been listening to Afrobeat and Migos.

13thSP: Teach us something, anything you have learnt over the past year of working in Jamaica’s live music industry.

TheRB: What I’ve learned is that I could care less about the industry and a lot of people in it. I know a lot of people inside of the industry and I’m cool with them when it comes to being outside of the industry. My main concern is the people who get up out of their homes with their money in hand, ready to pay and see me and other young acts perform. I care about blogs like this one because you guys get it right. You spell names right, you actually know the music, you ask sensible questions. I care about every single person listening, liking, commenting on and sharing the music. Because without all these people, an Artist like me cannot exist in this space. There would be no demand for me. You guys are the ones that make it all happen. Not “the industry”.

9 thoughts on “GET TO KNOW: @TheRoyalBlu”