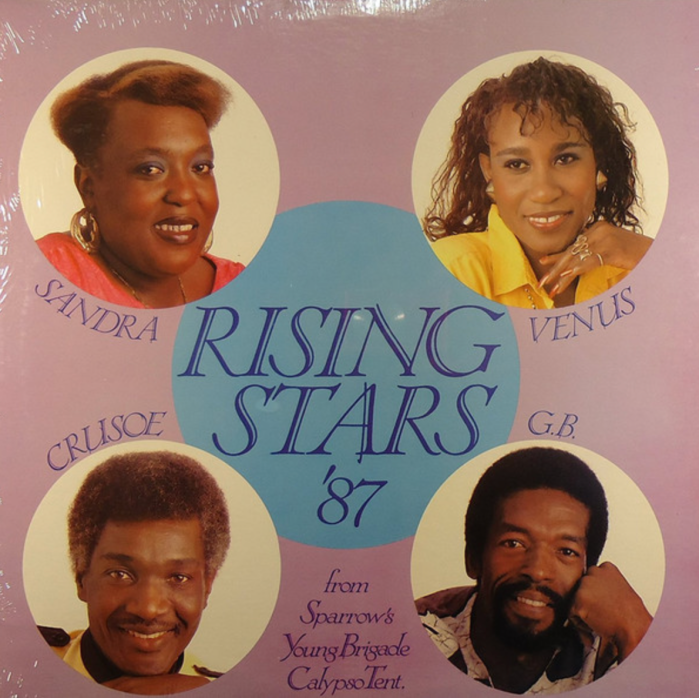 Today’s Oldies Sunday selection comes from the late Sandra DesVignes-Millington a.k.a. Singing Sandra. Today we go back to the 1980s with her track, “Die With My Dignity” a.k.a. “Sexy Employees“.

Written by Ortniel Bacchus with production and distribution by M&M Records in 1987, the track finds Singing Sandra sharing the challenges women face on the Island when it comes to finding employment. She shares the episodes where Employers try to take advantage of women in the workplace by sexually harassing and exploiting them for monetary gains. Singing Sandra puts her foot down as she’s not welcoming their advances, and would rather go elsewhere than to discard her morals and values for gains of any kind. Sadly this is what’s going on in workplaces around the world where gender inequality is concerned, and with the #MeToo Movement on the rise in the past few years, many men are facing the other side of the Law for their crimes.

Singing Sandra’s “Die With My Dignity” became a part of history as it helped her to win the titles of “National Calypso Queen” in Trinidad, and the “St. Maarten Queen Of The World“. The song would be later featured on the “Rising Stars ’87” album, and became one of Singing Sandra’s signature tunes. Since “Die With My Dignity”, she went on to become the second woman to ever win the Calypso Monarch title in 1999 after Calypso Rose. With another title win in 2003, she became the first woman to do it twice. One of the pioneers in Calypso industry, she paved the way for more female voices to emerge in a predominantly male scene. She continued to make music and seal her place as a Caribbean Icon until her passing on January 28, 2021. We remember her with this Oldies Sunday selection.

END_OF_DOCUMENT_TOKEN_TO_BE_REPLACED

Today’s Oldies Sunday is dedicated to all who celebrating wins whether big or small, and for those working towards their goals. The fight to greatness continues. Today’s selection comes from the great Half Pint with the track, “Victory“!

Produced by Mass Hugh for his self titled label and released in 1987, Half Pint sings for those who are in the struggle trying to make success a possibility. He points out to those living in poverty in places like South Africa, Jamaica, America, England, and Canada. With the help of Jah, Half Pint wishes a sweet victory for everyone, and make the world a better place. The single was featured on Half Pint’s “Victory” album that was released in the same year through RAS Records. “Victory” was a hit for Half Pint, and is one of his more memorable tracks.

THANK YOU HALF PINT FOR THIS CLASSIC!

If you’re celebrating a win today, we’re happy for you! Check out the track below, and share with a friend. Show us some love/follow us on Twitter and Instagram at @13thStreetPromo.

END_OF_DOCUMENT_TOKEN_TO_BE_REPLACED

It’s Wedding SZN! For the month of June, Oldies Sunday will feature some love songs that can be a great addition to your Wedding Playlists, and could be the official song to dance to. Today we close off the month by looking back at the late Dennis Brown’s 1987 track, “Inseparable“! Produced by Willie Lindo, this was through the UK J&W Records. The song features Dennis Brown professing his love for his significant other, celebrating how much his search for love is no more, how much she means to him, and just how they click together. A song that’s perfect for the Wedding reception, it’s one of Dennis Brown’s most popular love songs. The track was featured on his 1987 album of the same name.

Dennis Brown started out as a child star, and thanks to the many hits over the years, he became the “Crown Prince of Reggae“! July 1 will mark 20 years since he left this earth as a result of a heart attack and a collapsed lung, but he continues to live and inspire many through the music.

END_OF_DOCUMENT_TOKEN_TO_BE_REPLACED

In recognition of May being “Child’s Month“, Oldies Sunday will be highlighting a few child stars who made some noise in music. Today we go back to the 80’s with Teenage Recording Artist White Mice with his single, “True Love“! Produced by Junior Delgado on the Far East Riddim and released through Incredible Music in 1987, White Mice shares his testimony that Jah always comes through for him, and blesses him. The single was later featured on Mice’s debut album of the same name.

White Mice started his career in his birth Parish of St. James, but moved to Kingston for better opportunities. He was a member of the late Sugar Minott’s “Youthman Promotions” camp, and with the help of his Brother Courtney Crichton, he found success with “True Love“. Since the song’s release, he has went on to release more music, and made the move to Europe to further his ambitions as he became a Sound System owner there.

END_OF_DOCUMENT_TOKEN_TO_BE_REPLACED

Today’s Oldies Sunday was one that should’ve been posted a long time ago, but a recent event inspired its publishing. Remember when Dancehall Artist Shenseea released the visual for her “ShenYeng Anthem“? While many enjoyed the single, there were mixed reviews for the music video because of its intro. With today’s entry, I feel there would be some “outrage” from some folks if this was released today (some folks argue about every little thing online). Today’s entry comes from Chalice (though they were featured before, this song features mostly one of their Vocalists) with their single, “Sayonara“. Written by the legendary Lloyd Lovindeer, this was performed by one of the band’s Vocalists, Wayne Armond. Released through CTS Records in 1986, and Bold Reprive Records in 1987, this track features some Oriental influenced production with Wayne singing about his experiences with a Japanese woman in Jamaica. “Sayonara” (which means “Goodbye” in Japanese) was featured on the band’s “Crossfire” album and was popular in the 80’s and early 90’s. The video for the single was shot in Portland and featured the Boston Jerk Centre. Get familiar with something old by checking out the track below, and share with a friend. Show us some love on Instagram at @13thStreetPromo.

END_OF_DOCUMENT_TOKEN_TO_BE_REPLACED

It’s Sunday, and there’s something we’ve missed, and that is “Oldies Sunday“! Today’s selection comes from the legendary A.J. Brown a.k.a. “The Voice Of Jamaica“! Going back to the year 1987, we check out “All Fall Down“. Produced by Peter Ashbourne and released by Busy Bee Records, A.J. gave listeners a funky number in the 2nd half of the 80’s. In the song, A.J. lets a young lady know that despite being involved with other peoples and doing all sort of activities, he knows the way to her heart every time. While she can live in a make believe world, she lets down her guard when he’s around. The song was included in A.J.’s 1988 album, “Rhyme Or Reason“.

“All Fall Down” became one of A.J.’s hits, and he quickly became an Artist to watch. The single became so popular that it was featured on the soundtracks to “The Howling Pt. 3” and “The Fourth Protocol” movies. Since then, A.J. went on to deliver more hits, collaborated/performed with some of the biggest artists out there, lent his voice to various commercials and campaigns, and was also a Judge on Digicel’s Rising Stars competition. He is also the Lead Vocalist for Reggae Band Third World replacing the late William “Bunny Rugs” Clarke.

Check out the track below, and share with a friend. Show us some love on Instagram at @13thStreetPromo.