Recently, Comedian/Recording Artist Kyng Tavii had a moment of controversy. He revealed that he worked with currently incarcerated Dancehall Artist Tommy Lee Sparta on a few songs. Their working relationship however ended on a bad note, and Tavii chose to share his information after being accosted by associates of Tommy Lee. While Tavii faced some opposition and doubt that his talents were good enough to use in collaboration with the Dancehall Artist, he chose to share original material that would prove that he was legitimate. The track “This Is Not A Love Song” is one of his original pieces.

Produced by PeeKay Beatz, Kyng Tavii shows off another side to his sound on the R&B-tinged “This Is Not A Love Song”. Geared towards the ladies, Tavii puts together slick lyrics, a melodic delivery, and a great command of the original production for a song that sounds like a hit. Even the people who bashed him behind the scenes can’t deny that Kyng Tavii is legit with the music. Don’t worry, Kyng Tavii will be back with the Comedy soon, just get familiar with the music.

END_OF_DOCUMENT_TOKEN_TO_BE_REPLACED

Canada’s DJ BlkLuos returns with more work for the Summer! With a few singles and projects out, he continues to show his dedication to bringing new sounds out into the world, and introduce different voices on his platforms. Whatever your musical taste is, BlkLuos will take care of that. Recently, he linked up with fellow Canadian Recording Artist It’sRyan for the track, “I Know“!

Over some smooth production provided by DJ BlkLuos, It’sRyan has a conversation with a love interest on “I Know”, as he questions her motives, and sees if the connection is genuine. It’sRyan gives us great vocals throughout, and if you aren’t familiar with his music, we urge you to get to know him as he has been making his rounds as one of the Artists you need to hear. Accompanying the track is a music video directed by DJ BlkLuos, who continues to show the extent of his creativity, and starring Vancouver/Toronto based Model, Jessica Gianna.

DJ BlkLuos has a lot more music lined up for the 2nd half of 2022, so get your speakers and Playlists ready! Check out “I Know” below, and share with a friend. Show us some love/follow us on Twitter and Instagram at @13thStreetPromo.

END_OF_DOCUMENT_TOKEN_TO_BE_REPLACED

Sometimes we want that tingle in our spines, that warmth that is sometimes missing, that joy, the touch that is pretty special. While some may interpret that in any way they wish, newcomer onto the scene Vyouz shares that she has a need that should be dealt with expeditiously. She talks about it in her debut single, “Wet“.

Co-Produced by Rico’Keefe, Vyouz takes us into her world which is rather steamy, insatiable, and will have you losing your garments, and track of time. “Wet” can be described as “Baby making music“, and Vyouz looks to provide that and a lot more in her music career. Accompanying the single is a Visualizer which was directed by Vyouz in collaboration with Magical Studios. We expect Vyouz to make a big mark on the music scene, keep an eye out for more.

What do your think of Vyouz’s debut single, “Wet”? Check out the Visualizer below, and share with a friend. Show us some love/follow us on Twitter and Instagram at @13thStreetPromo.

END_OF_DOCUMENT_TOKEN_TO_BE_REPLACED

Earlier this year, Producer/Recording Artist Kris Karz released the groovy single, “ENERGY” with Singer Timothy David. Featuring smooth vocals and witty lyrics paired with a dope production, it was Kris’ 3rd single that was leading up to a project that had a possible Summer 2021 release. With life being life and Covid’s still running the show, those plans were postponed. Now with a renewed focus, Kris Karz is back to give the world for content. Today, we get the visual for “ENERGY“!

Directed by Dylan Golden, Kris Karz brings his A-game to your screen! Throughout the “ENERGY” video we can see him making some smooth moves on a beautiful Afro lady (played by Dyna Edyne), giving us some 70s Soul vibes. When he’s not getting into some player vibes, he takes it to the stage by performing with his band that consists of Kris Karz on keys, and Kris Karz on Guitar. Timothy David shows up throughout the video as well to deliver the hook. Kris Karz continues to give us dope visuals to go with his singles, and we know he has a lot more in store. If you haven’t been getting familiar with him, you need to change that now!

END_OF_DOCUMENT_TOKEN_TO_BE_REPLACED

Love is something special, isn’t it? History has shown us many episodes where love has affected humans in ways. For upcoming Recording Artist/Producer Azizzi Romeo, the idea of romance has prompted him to make music about it. From making one song soon turned into multiple tracks, and today we get to see it in a project form called the “Catharsis EP“.

Consisting of 7 tracks, Azizzi Romeo’s “Catharsis EP” was released through Charmax Music (owned by his father, the legendary Max Romeo). “Catharsis” refers to the process of releasing strong or repressed emotions, and Azizzi utilizes the action to its fullest throughout the EP. He shares a story of romance, with each chapter being an emotional episode. “I wanted to create something romantic. And I also wanted it to be honest.” Azizzi shares. “I ended up pouring out my emotions on some of the tracks. Midway through the creative process, I realized I was purging myself of the past, my mind had become as light as a feather. I had confronted my inner demons and subjugated them. So I decided to name the project ‘Catharsis’.” The production featured on the “Catharsis EP” taps into AfroPop, Dancehall, Reggae, Hip Hop, and R&B sounds, and provides great backdrops to Azizzi’s smooth vocals, and unique lyrics. The “Catharsis EP” is the follow up to his “Reggae Royalty EP“, which was released in 2020.

END_OF_DOCUMENT_TOKEN_TO_BE_REPLACED 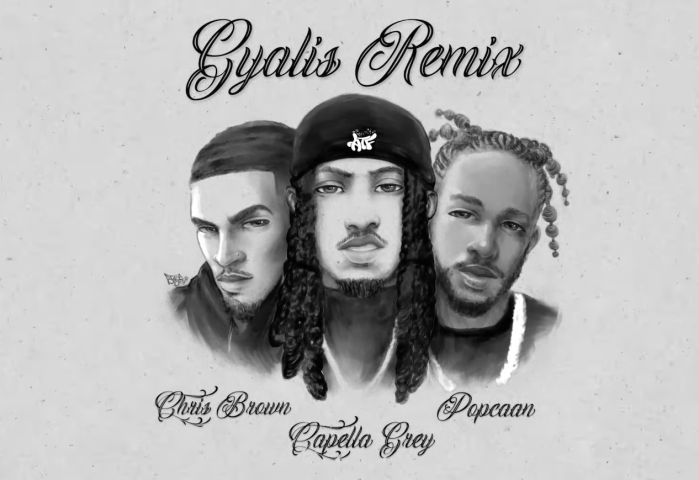 2021 has been a great year for US based Artist Capella Grey. His “Gyalis” single was everywhere from parties, to becoming a Social Media fixture, to even being featured on a few of your favourite Podcasts and Playlists. While it had some controversy thanks to his Genius “Verified” feature not sitting well with some members of Jamaican/Caribbean Twitter, “Gyalis” is still a hit. On a mission to grow the song to new levels, Capella recruited Popcaan and Chris Brown for the official remix.

While Chris Brown brings his signature vocals and energy, Popcaan steps in like a true gyalis with his verse as “the ladies crown him King“. “Gyalis” gets some new life on the remix, and if you haven’t been familiar with the song, now is the time to take a listen. 3 different Artists, 3 different types of Gyalis, one dope song. Capella touches base with his Jamaican roots in some of his music, and promises to be one of more prominent names for years to come. Popcaan on the other hand has been pretty busy these past few weeks, when he’s not buying sneakers in the UK, he’s hopping on plenty songs. The Unruly Boss continues to thrive no matter what’s going on.