Reggae Music has always been something that entertains, but it also seeks to educate fans as well. Known for dropping lyrical selections but also delivering knowledge and conscious music, Damian “Junior Gong” Marley continues to do just that. Today, we check out the video for the single, “Life Is A Circle“.

Directed by B+ and shot in Miami, Florida, Junior Gong not only gives us a performance of his single, but schools us on the history of the Virginia Key Beach (the video’s true location) which was Miami’s first “Colored Only” Beach which welcomed Black people and other marginalized communities. We learned that the Beach was possible due to many protests, and over the years faced closures until it was considered an ecological treasure and re-opened for good in 2008. Always something of high quality when it comes to Junior Gong, a living legend.

END_OF_DOCUMENT_TOKEN_TO_BE_REPLACED

Over the past two years, Rapper Daley HTG has been staying consistent with the music in efforts to solidify his brand. His partnership with Miami based NEUYU has found him becoming more creative with the releases. Despite the pandemic in 2020, Daley stayed busy, and in 2021, he looks to continue his run. As a matter of fact, he kicks the year off in a big way with the release of the music video for his 2020 track, “2021“!

Directed by Diego Jeanty, “2021” finds Daley HTG not only performing his track, but we get some behind the scenes looks at him making music, and making moves to expand his brand. Along with music in 2020, Daley also found himself in the world of Podcasting with the 1257 PodParrie Podcast along with co-host Jeniel. Watch what he does next in 2021.

END_OF_DOCUMENT_TOKEN_TO_BE_REPLACED

Directed by Peré and Life Is Good Productions and shot in Florida, Popeye Caution can be seen cruising through the neighbourhoods in search of that loot. Whether in the Benz truck or the Quad, don’t play with him. Splash Zanotti appears later in the video to handle business with Popeye and the track’s Producer, Felva. The video features cameos from Singer David Lyn and Dancer/Style Icon Shizzle Sherlock, and Popeye even previews pieces from his new “Clothes Jesus” fashion line. If you haven’t check out the track yet, stop wasting time and do that now!

END_OF_DOCUMENT_TOKEN_TO_BE_REPLACED

You can’t dull David Lyn’s shine. If the Covid 19 pandemic couldn’t stall his determination, nothing will. Having made a lot of noise this year, he’s only working his way up for the takeover. Today, he unleashed the new single, “Keep Moving“.

Produced by his Grammy winning brother (real real bredda) Izy Beats with assistance from Jamaican Band Phuzzion, David Lyn comes through with original vibes and lets badmind know that they can’t stop his show. With a melodic delivery that has captured the attention of many, he also encourages everyone to get out of the struggle, and to stay true to everything good. Accompanying the single is a Noorez “Nunu” Rhemtulla directed video shot in the infamous Tuff Gong Studio. Not only is David Lyn fueled by everything positive, but the spirit of Bob Marley flows through him in the studio for the video.

“Keep Moving” is featured on his upcoming “Any Day Now EP“, which is set for a December 4th release with launches in Dunagaroos (Wynwood, Florida) on November 25, and in Jangas (Kingston, Jamaica) on December 4. Expect a couple more surprises then, including some “Singy Singy” vibes. Let this track be a favourite for you today!

“Smooth seas never made a skilled sailor; no matter how big the waves get we must stay the course and keep moving.” – David Lyn

END_OF_DOCUMENT_TOKEN_TO_BE_REPLACED 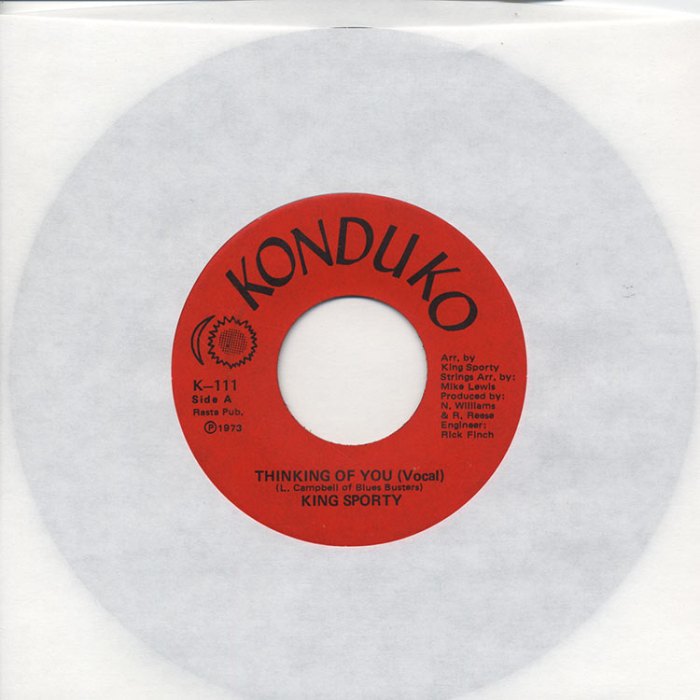 Yesterday (September 19) marked the 77th birthday of the late Singer/Musician/DJ/Producer, King Sporty. A man who was never afraid to try new things, he was a man who mastered his craft well, and the world loved him. Today, we salute him on “Oldies Sunday” with the selection, “Thinking Of You“.

Released in 1973 through the Konduko label, it was a more uptempo cover of The Blues Busters’ 1971 track which was produced by the late Byron Lee. King Sporty handled production here as it was a smooth blend of Reggae, Funk, and Soul sounds. On the track, Sporty shares lyrics about a lost love who he misses dearly, how them separating affected him, and pleads they give their relationship another chance. The production was really good on this, and made many believe that Sporty was the original performer of the track. “Thinking Of You” was played at various gigs including the Gusman Hall in Miami, Florida, where King Sporty resided and became a pioneer for the Miami Reggae scene.

Prior to “Thinking Of You”, King Sporty was a DJ for the late “Sir Coxsone” Dodd’s sound system. In the 70s, he became a label owner, performer, and co-wrote the Bob Marley classic, “Buffalo Soldier“. Since the mid-80s, he was married to the late legendary R&B Singer Betty Wright until his death in 2015. “Thinking Of You” was sampled in 2010 by Hip Hop group Fun Lovin’ Criminals for their “Classic Fantastic” track.

END_OF_DOCUMENT_TOKEN_TO_BE_REPLACED

Continuing his run of new tracks for every Friday in February, Daley is right on time with a new one. Inspired by his recent travels and his way with the ladies, he gives us, “Last Night In Paris“.

With production from Ian J, Daley keeps it short today as he shares an episode with a young lady. If you’re familiar with Daley’s music, you know he has a way with the ladies. For those who aren’t familiar with Daley, get in tune with his music here. While he’ll be closing off the month with another track next week, be on the lookout for a project from Daley in the coming months.