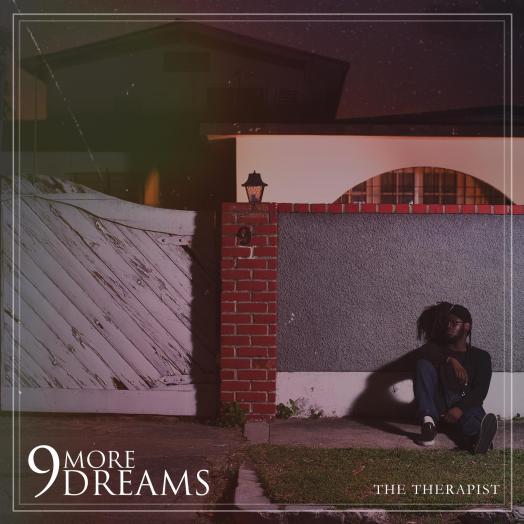 A few years in the making and a follow up to his debut, “Lethal“, Rapper The Therapist drops his “9 More Dreams” project. Assisting this conceptual piece is production from King Biggs, JLL, Riptide, Paris Lamont, Heatwave and Miguel James, Therapist considers this his best body of work yet. Trading verses with his Sons Of Liberty brethren The Rush and King Biggs, and Singer Jamila James, you won’t hear the typical raps from this yute. He also adds that this is the soundtrack to his first year spent living on his own. Get your ears ready, no nightmares in this slumber. Check out the album below and share your thoughts in the comments section.

END_OF_DOCUMENT_TOKEN_TO_BE_REPLACED 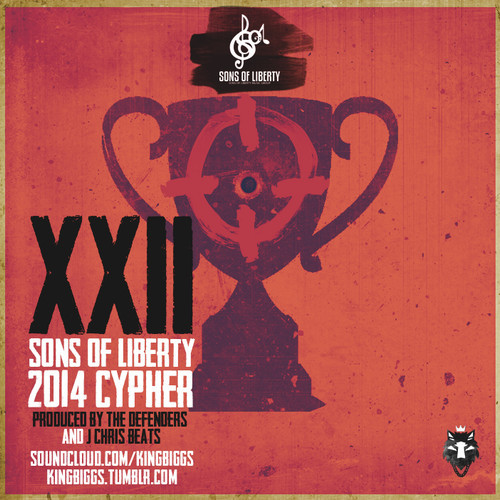 SOL is that gang man! With King Biggs’ “XXII” dropping tonight, the members of Sons Of Liberty got together and created the “2014 Cypher“. Produced by The Defenders and J Chris Beats, each member came with their part to form  Voltron on this production that chants, “SOL is that gang man!“. Speaking on how dope they are to what they’re going through outside the booth, this entry requires keen ears. I feel a video will be out for this. Check out the video below and share your thoughts in the comments section.

END_OF_DOCUMENT_TOKEN_TO_BE_REPLACED 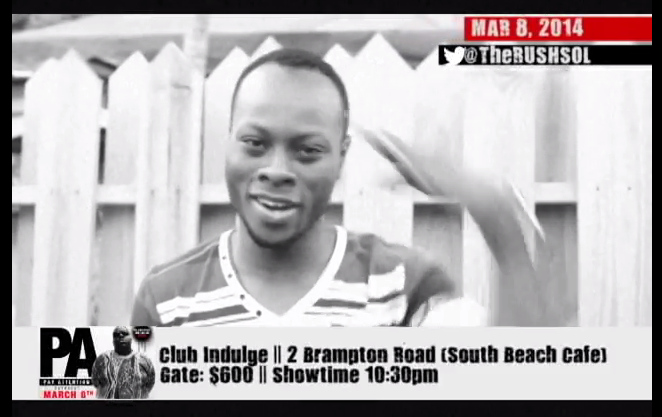 It’s time to PayAttention! On March 8, Club Indulge patrons will gather round and enjoy some great Jamaican Hip Hop and to celebrate the life of Rapper Biggie Smalls. Located at 2 Brompton Road, Kingston and hosted by The Sickest Drama, you’ll be treated to performances by Makonnen, Tristan, Reazonz, and Shanique Marie. Check out the Hype TV promo by The Rush and Tristan from Sons of Liberty by checking out the video below and share your thoughts in the comments section.

END_OF_DOCUMENT_TOKEN_TO_BE_REPLACED

On January 25, 2014, Jamaicans were treated to the staging of “Pay Attention“, a Hip Hop concert series held at Club Indulge (South Beach Cafe). Hosted by The Sickest Drama, performances included The Rush, K John, Five Steez and Kabaka Pyramid. I’ve previously posted about the event but today The Gleaner has released a video of the event and interviewed the performers who spoke about the Hip Hop culture, Pay Attention, and how Jamaican Hip Hop is on the rise. Check out the video below and share your thoughts in the comments section. 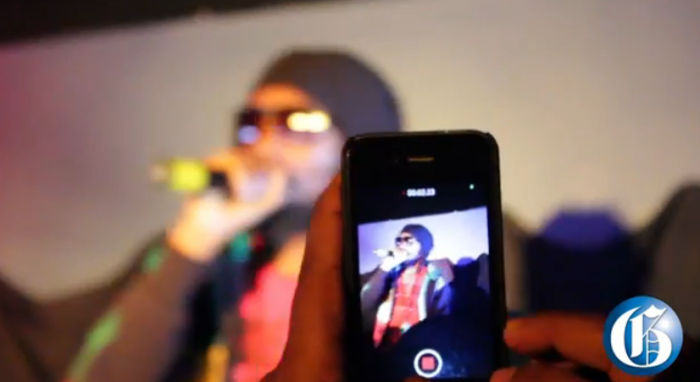 Me recording Kabaka Pyramid on my phone…ha!

END_OF_DOCUMENT_TOKEN_TO_BE_REPLACED 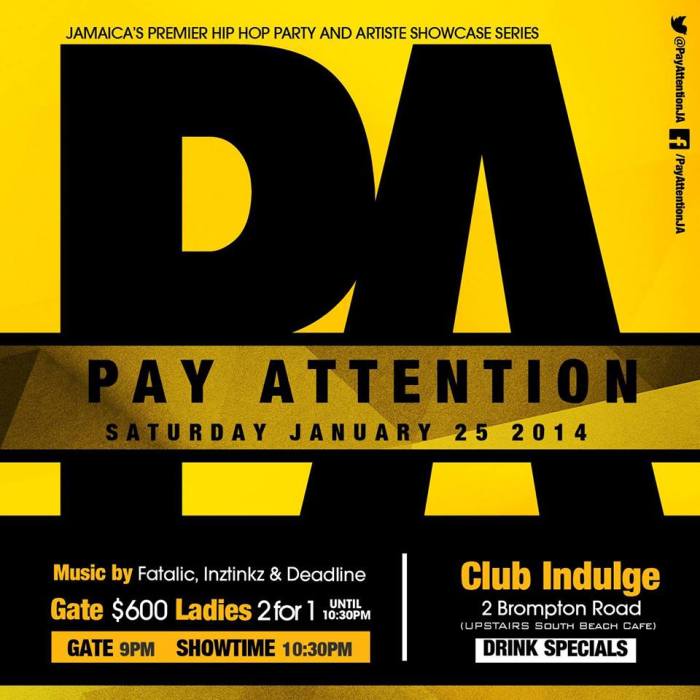 Jamaican Hip Hop saw a new year over the weekend thanks to the first staging of Pay Attention. Held at Club Indulge and hosted by The Sickest Drama, patrons were treated to the musical endeavors of The Rush, K John, Five Steez and Kabaka Pyramid. The night began with a mix of new and old school Hip Hop provided by Fatalic, Inztinkz and Deadline for the patrons followed by Break Dancers showing another element to the Hip Hop culture. First up to perform was The Rush. Accompanied by a guitarist for his introduction, Rush kicked off his set with verses from his songs along with feature verses from Sons of Liberty songs. Accompanied by his Sons of Liberty brethren later, they all showed that #DatGang was there to make noise and get the people moving. After raising the energry levels, The Rush made way for the next performer, K John of the Gamblino Money Gang. Starting off his set with the National Anthem, he dropped lyrics about Kingston life and what you can find in Jamaica. K John, who was accompanied by his GMG brother for a song, also dropped lyrics about his love for marijuana and requesting its legalization, and the Gamblino life all while having the patrons paying full attention and following every command.

Starting his performance in the crowd was the next performer, Five Steez. Steez ran through a couple of his singles from his “War For Peace” album including a remix of “Slaving On The Plantation“. In respect to those who’ve followed his music for years, Steez also performed one of his songs off his “Momentum Vol. 1” mixtape to much delight from the audience. Before closing his set, Five Steez performed a song that will be featured on his upcoming project, “These Kingston Times“. The final performance of the night came from Bebble Rock founder, Kabaka Pyramid. With an arsenal of lyrics, Kabaka ran through many of his songs before letting the people know that he grew up on Hip Hop music and respected lyricism. Acknowledging Canibus, Wu-Tang Clan, Mobb Deep, and Spragga Benz as influences, Kabaka continued his set with some of his songs over old school hip hop instrumentals which had the crowd in a frenzy. With appearances by Koro Fyah and Shanique Marie, Kabaka had the audience’s attention until the final minute where he recited a very lyrical verse and demanded someone to challenge it. Challengers included The Sickest Drama who performed an unknown amount of bars (Let’s say 200 bars), King Biggs from Sons Of Liberty, Femcee Ice Creame, and Rseenal who have all impressed with their lyrical prowess. Highlights of the night? The Sickest Drama’s performances between sets, Rseenal’s performances, SOL bringing energy to the stage, Breakdancers, Five Steez’s “5 4 3 2 1”, and Kabaka throwing up the Wu-Tang Clan “W” before performing over old school Hip Hop beats and reciting some of the original lyrics to the beats. Check out pics and videos from the event below and share your thoughts in the comments section.

END_OF_DOCUMENT_TOKEN_TO_BE_REPLACED

It’s time to PayAttention in 2014! On January 25, Club Indulge will come alive to the sound of Jamaican Hip Hop. Located at 2 Brompton Road, Kingston and hosted by The Sickest Drama, you’ll be treated to performances by Five Steez, The Rush, K John, and Kabaka Pyramid. Check out the Hype TV promo by Rseenal by checking out the video below and share your thoughts in the comments section.