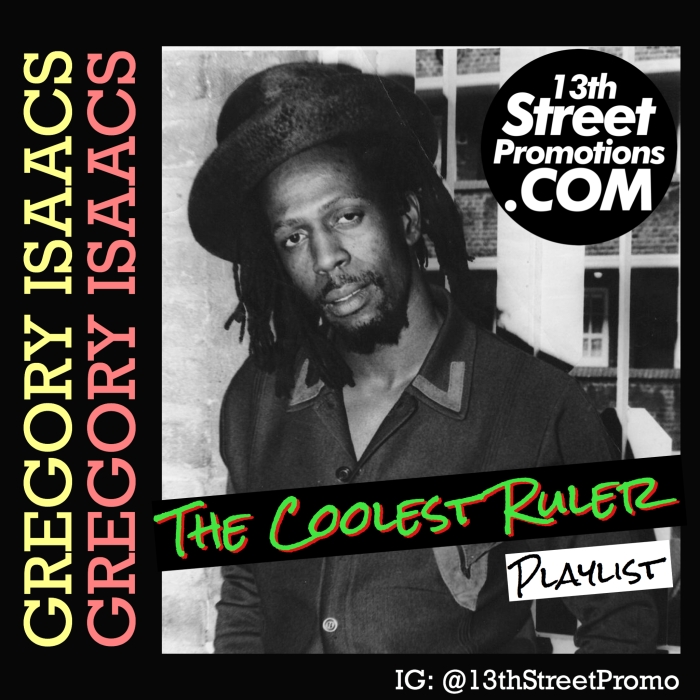 Today we celebrate the legendary Gregory Isaacs on his 68th birthday. While he left this world nearly 9 years ago, his music continues to entertain and inspire many all around the world. Today we pay tribute to his life and greatness with our latest Playlist, “The Coolest Ruler“! With over 30 of his hits, this is just a small portion of Gregory Isaacs’ greatness. Feel free to buss a blank, grab your partner and dance away, and enjoy the tunes! Continue resting Mr. Isaacs.

If you want to check out our previous Playlists, you can find them here. Check out the Playlist below, and share with a friend. Show us some love/follow us on Twitter and Instagram at @13thStreetPromo.

END_OF_DOCUMENT_TOKEN_TO_BE_REPLACED

Happy Sunday folks! Hope you all are doing well. If you’re a regular customer of Netflix, then you’re aware that the latest season of Marvel Comics’ “Luke Cage” is here! This season gets pretty interesting as one of the season’s Antagonists, “Bushmaster“, has a Jamaican background. While we’re pretty excited about it (the terrible accents however, no no no…), we’re even more excited that a few classic Reggae songs can be heard throughout the 13 episodes.

Today, we present to you the songs that were featured in our latest Spotify Playlist! Enjoy hits from Bob Marley, Ini Kamoze, Gregory Isaacs, and many more! Stay here for the music, but you can Netflix & chill with “Luke Cage”: Season 2 later. Congrats to Jamaican Actor Desmond Dennis on being a part of the cast. Check out the playlist below, and show us some love on Instagram at @13thStreetPromo.

END_OF_DOCUMENT_TOKEN_TO_BE_REPLACED

Yep, it’s a rainy time in Jamaica…a VERY rainy time. While many are dodging raindrops to get to their destinations, there are others who have taken to the beds, called in sick, and kicked off the “Day Off”. While we understand both sides of this coin, we’re here to provide a lil soundtrack for these heavy showers. We sympathize with those who are having it hard at this time, and we hope some well needed relief comes your way! Check out the songs! Stay dry!

END_OF_DOCUMENT_TOKEN_TO_BE_REPLACED

The wife of the late veteran Reggae artiste, Gregory Isaacs, is set to reveal a mural for Isaacs on July 15th 2015 in Downtown Kingston – between Charles Street and Orange Street. June Isaacs shared, “Gregory Isaacs is still very dear to my heart, and this is a way for others to remember him for his music, performances and songwriting”.

The ceremony will highlight the music and charitable work done by the veteran along with tributes from friends of the music fraternity. June added “this is slated to be a remembrance of all that Gregory has contributed to music and several communities; he was a great man that aimed to make positive changes wherever he went”.

The legendary Gregory Isaacs is known for singles such as ‘Night Nurse’, ‘Number One’ and ‘Hot Stepper’ just to name a few. It has been 6 years since Gregory Isaacs’ passing and his fans still very much appreciate his music. His foundation The Gregory Isaac Foundation was formed after his passing in 2011 by June Isaacs and was done in an effort to continue his charitable work.

The core focus of the foundation is child welfare and anti drug/violence messages which are highlighted every November – Drug Awareness Month. The main beneficiaries are the Walkers Place Safety, St. Barnabas Early Childhood Institute, Black Harmony Basic School and the National Council for Drug Abuse.

The unveiling of the mural for the late Gregory Isaac is set to begin at 4pm and end at 6pm.

END_OF_DOCUMENT_TOKEN_TO_BE_REPLACED

It’s all about the “Irie Vibes” and the ladies today with RSNY as they’ve released the visuals for “She Just Wanna“. Directed by H. Styler, we see the RSNY members getting ready to chill with their ladies and get “Irie” while the ladies prepare for their visit. Not a bad effort here as the song over the Night Nurse Riddim gives you a mellow vibes and you’ll chuckle a little during their candid scenes and when they met the “Skriminals“. You can check out the single and more on their “Irie High” mixtape here. Check out the video below and share your thoughts in the comments section.

END_OF_DOCUMENT_TOKEN_TO_BE_REPLACED

International Reggae Day is not only a day to recognize the power of Reggae music, but to remember those who’ve paved the way for other artists to create it. Known as the “Cool Ruler“, Gregory Isaacs warmed many hearts and captured the attention of many with his smooth deliveries and lyrics. With over 500 albums to his name, Gregory was always working and delivering the hits worldwide. Today, St. Lucia’s DJ Levi Chin pays tribute to the late singer by creating a mix of some of his biggest hits. Check out the mix below and share your thoughts in the comments section.