This one has been in the making for a long time. Dancehall Artist Valiant continues to bring his name to more listeners and extend his profile with well-crafted tracks. This time around he teams up with the boss Chronic Law on, “Darkness“.

With a video directed by Shane Creative, Chronic Law and Valiant hold a meds on the much-anticipated collaboration. “Darkness” was produced by Droptop Records, and the Artists share their observations and experiences from the lives they live. Chronic Law continues to show his heavy work ethic as he hasn’t missed a month when it comes to releasing content, and with Valiant on a track, they can’t miss. Like the Bots on Youtube, these Artists haven’t disappointed their fans, and we look forward to even more collaborations.

END_OF_DOCUMENT_TOKEN_TO_BE_REPLACED Dancehall Artist Chronic Law has seen and experienced a lot in his lifetime. While some days are good, they are temporary as he has experienced a great deal of pain that it’s hard to heal from. He uses the music as a form of therapy, and he shares his pain on, “Scars From War“.

With a video directed by Glimpse Cinema, Chronic Law sheds a few tears on the Droptop Records produced “Scars From War”. He reflects on some of the things he has done, and while he may have done some wrong for a better life, he lost some good people along the way, and it has changed him completely. He pleads to God to spare the lives of his friend that are still present as his heart cannot take another loss. The video finds Chronic Law mourning the dead in a black suit, then sending them off while wearing a white suit. War comes at a hefty price, and though battles may be won, the loss of life makes everything feel less victorious. Pray for the fallen Soldiers, and for those who are suffering, try to seek help today.

END_OF_DOCUMENT_TOKEN_TO_BE_REPLACED

Dancehall Artist Chronic Law is arguably one of the most consistent Artists in the past 5 years. A month does not pass without him releasing a handful of singles and videos, and his fanbase is loving everything. From conscious tracks to aggressive tracks, the “Law Boss” has every sector locked. Speaking of locked, he has his arsenal ready on the new single, “Four Four“.

Produced by Digital Productionz, Chronic Law ensures that his clips are full, and wherever the war is, he’s armed to the teeth. “Four Four” is one of the many pieces of content Chronic Law has already released this month, but it’s all in the name of making money daily. We can’t be mad at that. Expect a lot more from the “Law Boss” in the coming days.

END_OF_DOCUMENT_TOKEN_TO_BE_REPLACED

The legendary Bounty Killa continues to uphold his role as a Dancehall Giant, even at 50 years old. Still influencing and providing a voice as an elder, it’s hard to find an Artist who isn’t seen as one of his kids, or grandkids. Come this Saturday (July 23), he will take the stage at one of Jamaica’s greatest musical events, Reggae Sumfest. Before that however, he needed to make a statement in the video for “As A Badman“.

On the Prado assisted single, Bounty Killa lists out the bullet points for what it takes to assume the role of a “Badman“, and calls out those who violate certain guidelines. Prado gives his points as well, and the duo make a great tune over a production that’s fit for a Gangsta. The accompanying Tinman (Swag TV Filmz) directed music video, we see a story play out of a badman who causes trouble in the community, but in the end gets a dose of his own medicine. ZJ Rush, Shane O, Predator, and Chronic Law make cameo appearances in the video, with the later playing a key role throughout.

Bounty Killa is also working on his upcoming “King Of Kingston” album that has well anticipated since its announcement a couple years ago. While the tracklist has gone through a few changes, Bounty is taking his time with what could be called his best body of work. If you’re in Catherine Hall, Montego Bay, be sure to catch Bounty at Reggae Sumfest!

END_OF_DOCUMENT_TOKEN_TO_BE_REPLACED Digital Music Streaming platform Audiomack has been blazing it up with their “Bless The Yaad” series since they launched it in September 2021. They have gained quite the following thanks to performances from some of Dancehall’s brightest names, leaving unforgettable impressions on their fans. For their 16th and final episode, the “Law Boss” Chronic Law closes out the series in style.

Born Akeeme Campbell, and hailing from Yallahs, St. Thomas, Chronic Law has elevated himself to becoming one of the leading voices in the newer generation of Dancehall Artists. While he has been on the grind for a number of years, it wasn’t until singles like “Hillside”, “Government”, “Hilltop Badness”, “Bless Me”, “Nuh Trust Nobody”, and “Watch Man” that he soon became the talk of the town, and a name to know in various parts of the world. When he speaks, the people listen, and with a TGUT Riddim, Chronic Law advances with the lyrics effortlessly like a General in a heated battle. If you haven’t been familiar with him, now is the time to get your mind, headphones, and speakers in tune with the “Law Boss”! Fully 6ix, fully dark!

“Bless The Yaad” is the Caribbean version to the popular Audiomack series, “Bless The Booth”. The series is executive produced by Tanya Lawson, with audio by TGUT and Flaire, and video by Sage English. The series premieres every Wednesday with a new featured Artist, and is filmed at the Reggae Legends Villa in Kingston, Jamaica.

END_OF_DOCUMENT_TOKEN_TO_BE_REPLACED 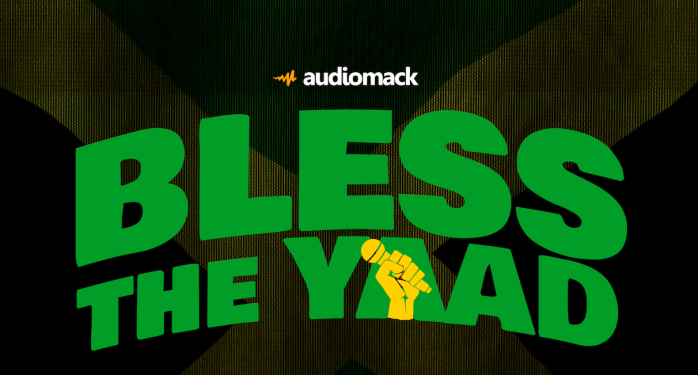 Digital Music Streaming platform Audiomack has been making the necessary moves to become the hub that artists and creators around the world can grow and benefit from. For years Audiomack has been highly influential, and has helped to launch and enhance the careers of many upcoming and established acts. Outside of providing the space for artists to upload their music, Audiomack has launched original content which include features from some of your favorite names in entertainment.

Tapping in the Caribbean aspect of Audiomack, they included Dancehall Artists Alkaline and Konshens to perform in the platform’s popular “Fine Tuned” series earlier this year. Seeing the success of those performances, Audiomack has now launched their new performance series called, “Bless The Yaad”.